In 2006 MORNINGSTAR  FLUTE  ENSEMBLE, founded by Charlotte Ellis, made a concert tour of Hungary, where they have been invited to return.  Recently they have played at the Paramount Center for the Arts in Bristol, TN, participated in two Arts Series in Kingsport, TN, performed at Emory and Henry College in Emory, VA, and Maryville College in Maryville, TN.  In August of 2012 they gave a concert at the historic and beautiful Tiffany-decorated Willard Chapel in Auburn, NY.

The Ensemble is named in honor of the founder’s mother, Martha Fassnacht Bird, who recently celebrated her 94th birthday, and who, as a young mother, would often wake her small daughter and carry her out into the darkness to view the serene and shining beauty of the Morning Star.

Participants in the ensemble are all fine solo instrumentalists whose tones blend beautifully to form the unique sound of MORNINGSTAR.

Flutist Georgia Dimaano is the founding director of The Pennsylvania Flute Choir and plays the entire flute family from piccolo to contrabass flute. She performs as principal flute/piccolo with the New Holland Band and is a freelance musician in suburban Philadelphia. Ms. Dimaano holds memberships in The Flute Society of Greater Philadelphia, American Federation of Musicians, and the National Flute Association. A graduate of Immaculata University, Ms. Dimaano is a human resources professional.

Sarah Latanyshyn, a native of Auburn, is very happy to be performing again in beautiful Willard Memorial Chapel. Having earned an undergraduate degree from Syracuse University and master’s degrees from the University of Tennessee, Knoxville, and New York University, Ms. Latanyshyn is currently a PhD candidate in ethnomusicology at the University of California, Santa Barbara, where her research focuses on Eastern European folk music festivals. She is a member of several professional music organizations and has taught private flute lessons in Knoxville, Auburn, and New York City.

Bradley Legg is a recent graduate of the University of Tennessee, where she earned a Bachelor’s degree in Music Performance. She has performed with the University of Tennessee Flute Choir, Wind Ensemble and Symphony Orchestra. Though her primary instrument is the flute, she enjoys learning to play a variety of other instruments. She plans to obtain a Master’s Degree in Music Education in order to teach young children the joy and wonder of music, which has so enhanced her own life.

Janet Reinholz plays flute, piccolo and contrabass flute with several groups in eastern Tennessee and western North Carolina, including Grace Notes Flute Choir, Silver Winds Flute Choir, Mountains of Asheville Flute Ensemble, Central Baptist Bearden Orchestra, Smithwood Praise Band, and KnoxCAM (a group which performs in prisons and shelters), and has played with various groups in Europe and the Middle East. A member of the National Flute Association, Janet is a recently retired teacher who had a special affinity with her third grade students.

Flutist and music teacher Ally Tarwater received both her Bachelor and Master of Music degrees in Music Education from the University of Tennessee, where she studied under Dr. Shelley Binder. During her time in Knoxville, she maintained a studio of over thirty flutists and was an active performer. Now residing on the Eastern Shore of Virginia, Ally plays with the Orchestra of the Eastern Shore, teaches woodwind and brass lessons at the Eastern Shore’s Own Arts Center and is on the advisory board for the Hampton Roads Flute Faire. In her spare time, Ally enjoys knitting, kayaking, and learning cello.

Hayley Wheelock is a flutist and teacher from Jonesborough, TN. A student of Dr. Shelley Binder, she earned her music education degree from the University of Tennessee, Knoxvillle, and is a middle school band director in Jonesborough. Hayley has been an avid performer for many years. She won MTNA’s Solo Competition in the Senior Woodwinds Division in 2008 and placed in Hampton Roads Flute Faire’s College Competition in 2009. She was a member of the University of Tennessee’s Wind Ensemble for 9 consecutive semesters.

Morningstar’s accompanist, Anne Sorrell, earned a degree in Piano Performance from the University of Tennessee, Knoxville, and taught music in the Kingsport City Schools. While living in Rochester, NY, she studied at the Eastman School of Music, taught at the Hochstein Music School, and was employed as pianist at Browncroft Community Church. She is currently organist/pianist at Mafair United Methodist Church in Kingsport, TN, and teaches privately in her piano studio. Anne is a member of a number of professional music organizations and has been named Teacher of the Year by the Appalachian Music Teachers Association.

Morningstar Flute Ensemble’s founder, Charlotte Ellis, is a freelance musician and composer living in Blountville, TN. She performs in a number of ensembles in the east Tennessee area, including the flute and piano duo Windsong and Bittersweet Celtic Ensemble. She has toured in Britain, China, Australia and New Zealand with the Veterans Administration National Medical Musical Group. Charlotte holds membership in the National Flute Association and is a former flute instructor. She is the owner of Flour Fancies Bakery. 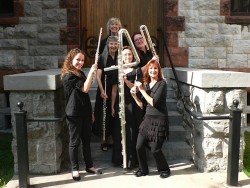